Okay — some time has passed since   I launched the Asbury Park Comicon. And at some point I’ll write more about what went into making it a reality. I could say it was a lot of work or it was hard, but there’s no way to measure that, and hard compared to what? We’d just come off of Hurricane Sandy — I think what the victims of the storm were going through was hard, what we went through was a challenge.

But with everything that life, nature, and city politics put in our way, we did reach May 30th, 2013 and the fans showed up. As did the talent. It was a glorious, if not frantic day. Friends from as far back as high school visited to wish me well (brought together through the magic of social media), as well as family, neighbors, old employees from my screen printing days, and the comics community.

We invited some great guests, some who’ve turned into friends. I especially had a great time with Ren & Stimpy co-creator Bob Camp and punk artist John Holmstom. 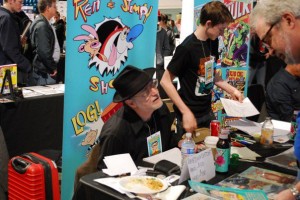 At one point at dinner with them, I laughed so hard I though shrimp would shoot out of my nostrils.

Other than that, the day was a blur with interviews, autographs, a costume contest judged by my neighborhood celebs Bryan Johnson, Mike Zapcic and Ming Chen of AMC-TV’sÂ Comic Book Men, and Brian O’Halloran of the filmÂ Clerk’s. 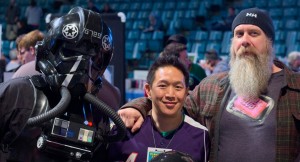 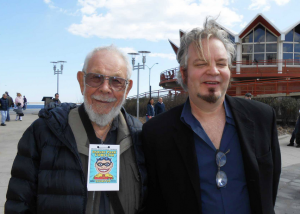 Oh, yeah — and here’s MAD Magazine’s Al Jaffee a week after turning 95 with me on the Asbury Park boardwalk. When I originally invited him 6 months earlier, he said, “Cliff, I’ll be there if I’m still alive.” To which I replied, “Me too, Al.” And a month later I was hit by a car. So never kid about that shit.

And it was Judie’s birthday and someone made her a special gluten free cake!

I have a lot more to say about this event, with Allen Bellman, Danny Fingeroth, Herb Trimpe, Evan Dorkin Sarah Dyer, Jim Salicrup, and will ad to this soon. 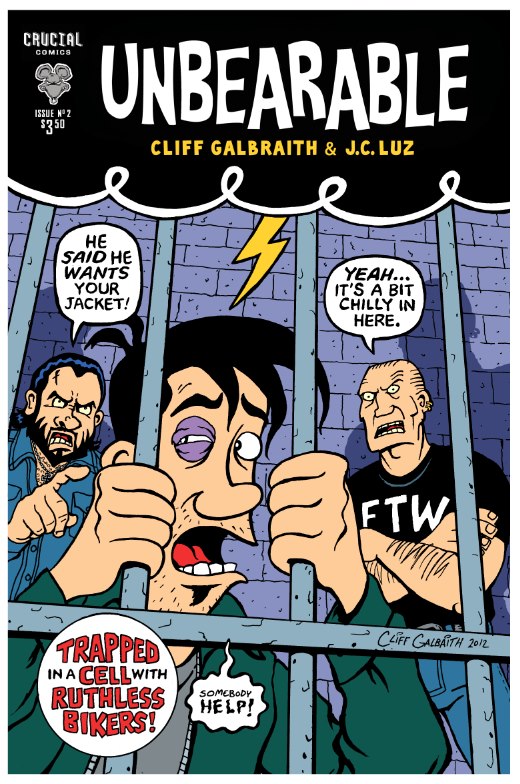 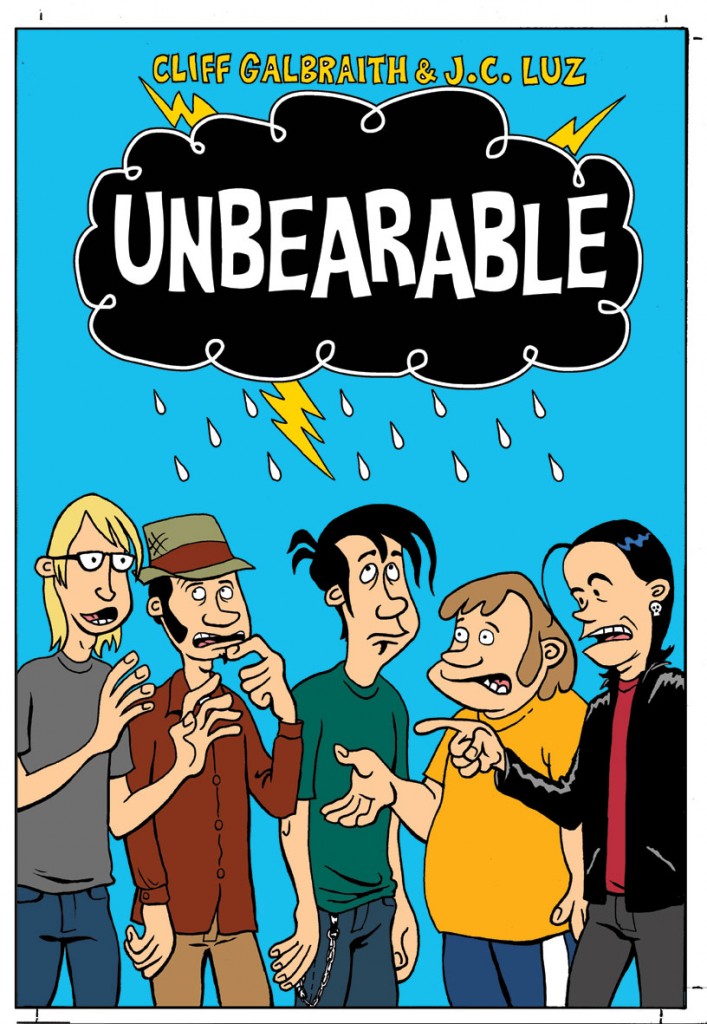 I’d hoped to have had this one ready for MoCCA Fest in April, but we changed the name and well, you know how it is. Or do you? Inspiration comes and goes. Ideas seem great, then days later they don’t. Characters take time to develope Â — I found some notes for this story, and only one out of the original five names or characters survived.

Also, I’m collaborating on this with my wife, Judie this time. It’s based on a concept she had many years ago. It made us laugh back then and we began noticing things and phrases that would go into here story. A few years ago, I was looking for an animated project to work on, so I started conceptualizing her story ( some of it was posted here about two years ago). A lot of it is based on our days in New Brunswick , NJ where we met.

So here’s the cover. One things for certain — this is a lot easier than those damned Rat Bastard pages. Well, not easier, just simpler. After all, none of this is actually easy. 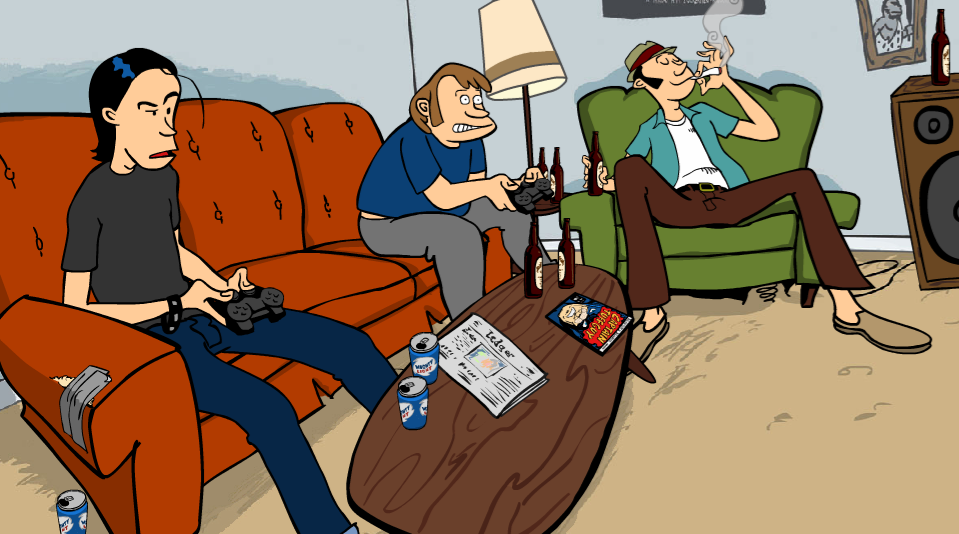 The boys enjoy a leisurely afternoon having a few beers, smokin’ a fatty, and playing the new “Captain Tough Guy: Total Annihilation.” The real purpose here is to get some props drawn and begin designing Ben’s house. 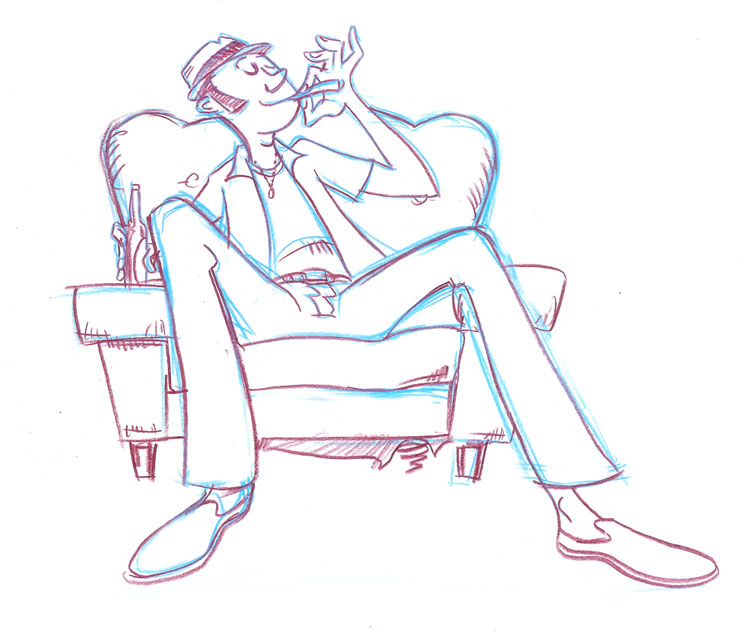 Jeesh! Has it been a month since last post? It’s not like I’ve been sitting around like Lou here — I’ve been writing the pilot, which is getting close to completion. Also, some drawings of possible supporting characters and backgrounds like houses, living rooms, kitchens, etc. But if I post everything, there’ll be no reason for you to tune in. 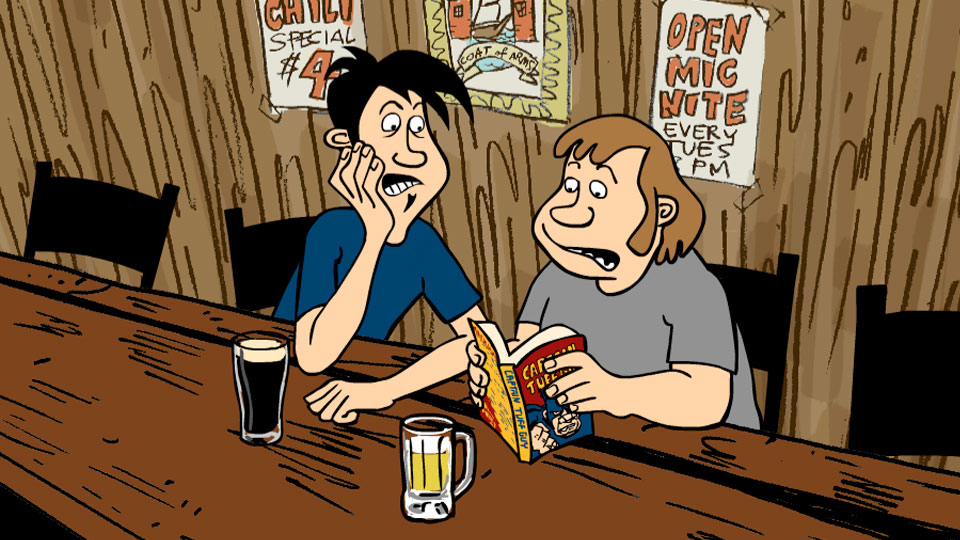 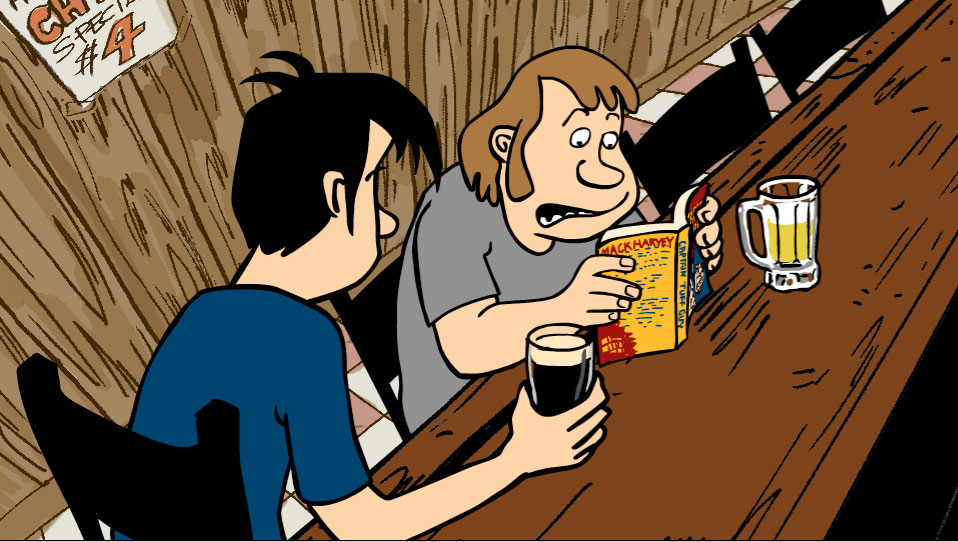 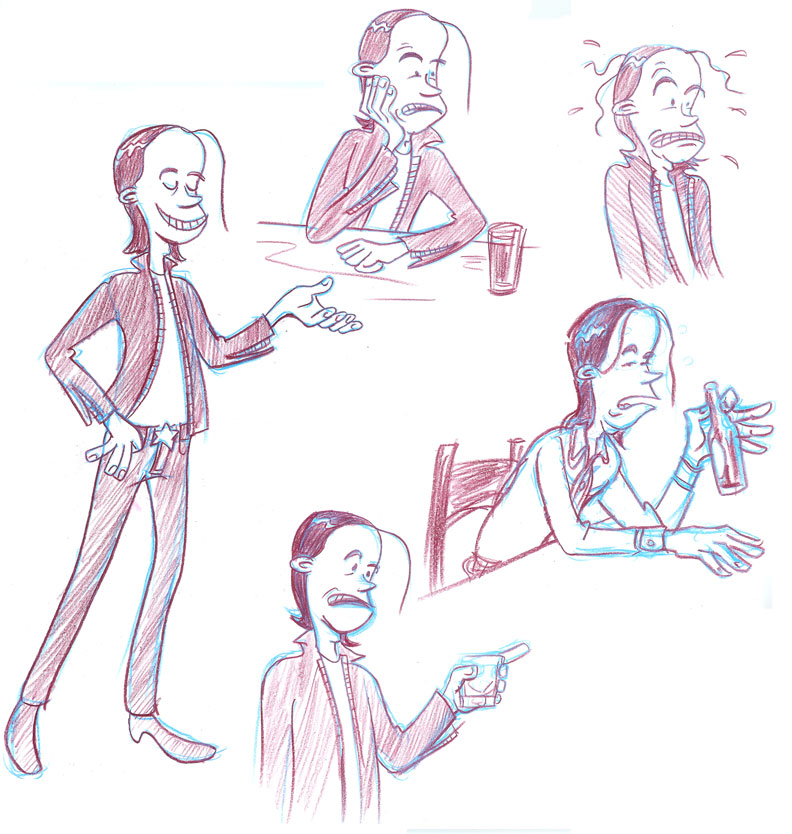 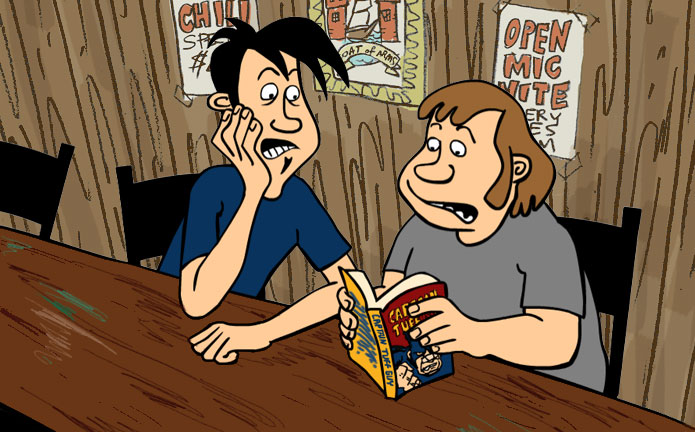 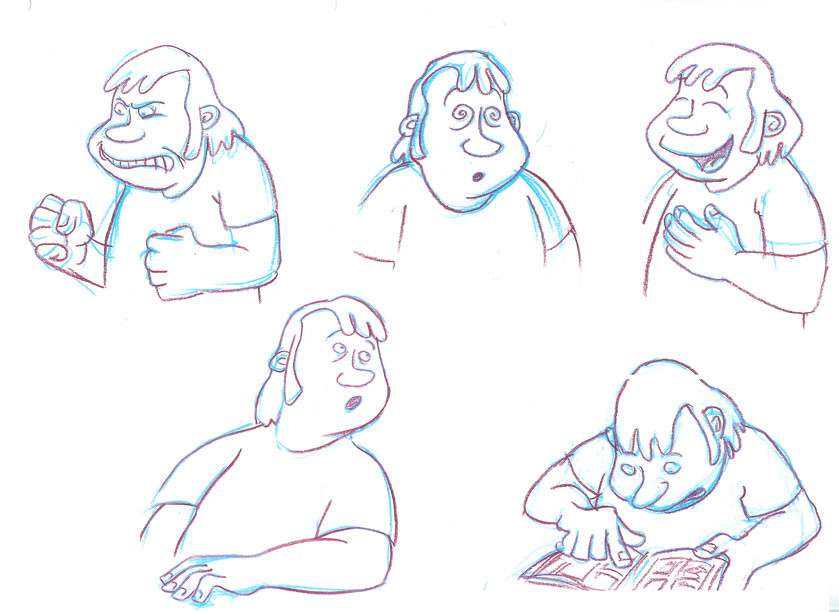 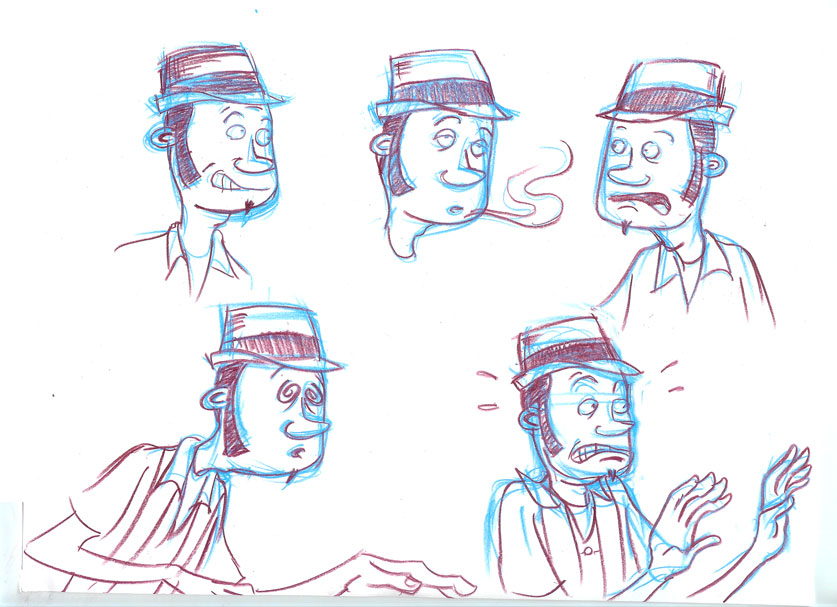 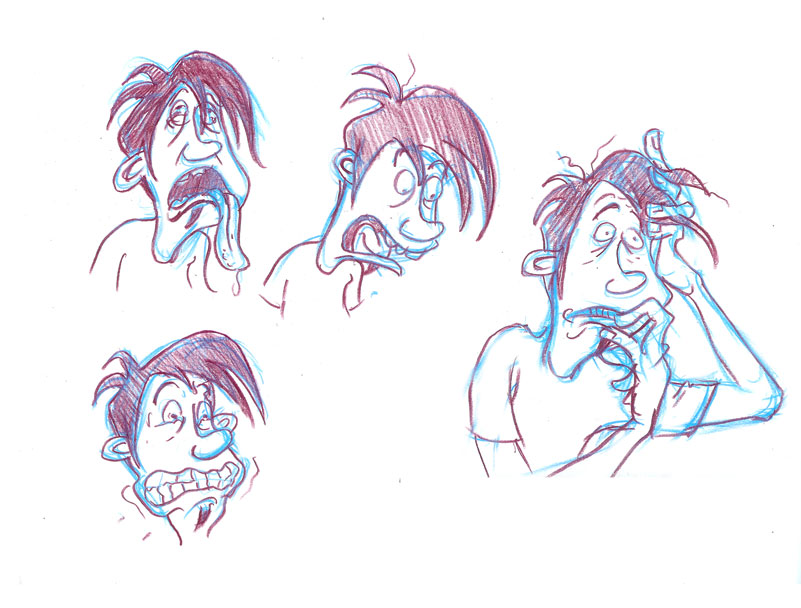 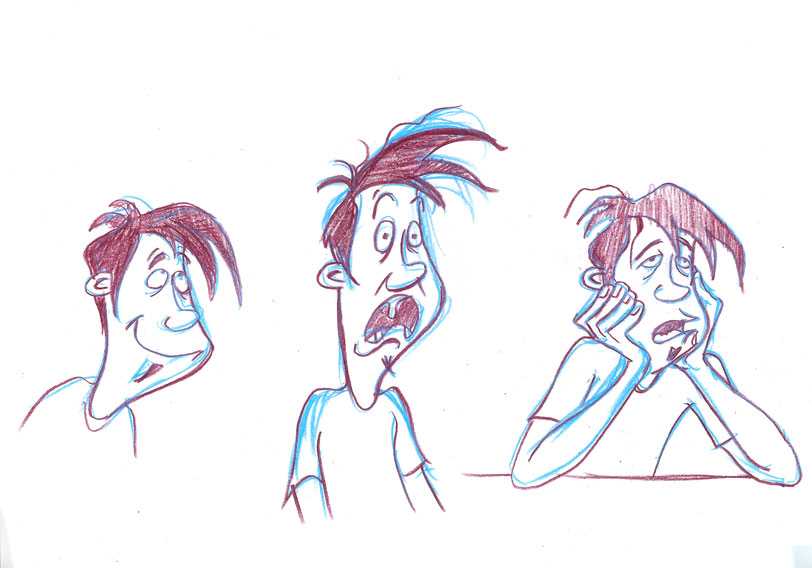 Ben Freeman goes from illness to terror to nervousness to euphoria to exhaustion.