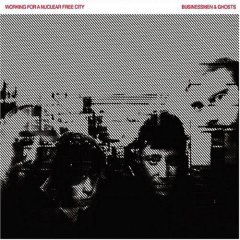 Working For A Nuclear Free City â€“ â€œBusinessmen and Ghostsâ€

Clocking in at 1.7 hours, Businessmen and Ghosts is all over the modern British music musical map. This Manchester band is one part Fluke, one part, Stone Roses, a touch of Ride, some Radiohead, a little ambient, a pinch of low-fi, groove, experimental, and a whole lot more â€“ hell, thereâ€™s 29 songs on this release. At times, Iâ€™m not sure itâ€™s the same band from one track to the next. Iâ€™m not even sure if I like the whole thing â€“ but thatâ€™s not the point of this entry â€“ itâ€™s just what Iâ€™m listening to this week. If I were to give them a grade, I would say A for Ambitious, but D for Donâ€™t Know Which Way To Go.

UK Producer Calvin Harrisâ€™ cock-sure title â€œI Invented Discoâ€ is a tongue in cheek send-up of the dance floor culture. Harris channels everyone from Bootsy to Rick James to Cerone, sprinkled with the most vapid, clichÃ© lyrics inspired by the golden days of 70s disco. Itâ€™s all good fun and great for parties. But â€œI Get All The Girlsâ€ is the best tune by far â€“ a really funny take on the self-absorbed strutting disco dandy.