It’s been a long time since I’ve worked on Roscoe and his cohort on a consistent basis. In my old life as Rat Bastard illustrator C.J. Huja, I had a certain naive idea of what Roscoe and the inhabitants of his world should look like. They looked like whatever came out of my pencil — there was no real development. A few sketches and there was Roscoe.Most characters were never more than one or two sketches before they were finalized. I had no real understanding or training in character development.

When Imagine Entertainment optioned Rat Bastard for a TV show on UPN in 2000, I saw other artists’ interpretations of my characters. Being in awe of those who worked in animation, I was impressed when they took Roscoe’s ears, and move him to the side of this head, much like The Secret of N.I.M.H. or some of the Disney characters. They made him more realistic, his ears being more like the way a rat’s ears actually sit on its head.

After the option expired and Imagine’s efforts pointed elsewhere, I continued to study the character designs of Roscoe. He looked very much like he could be a character from “Batman The Animated Series”and I tried to incorporate the look into my own new, improved version of Roscoe. He was more angled, more animation friendly in some way. But the more I tried to force his ears to the sides of his head, the more I felt something was missing. 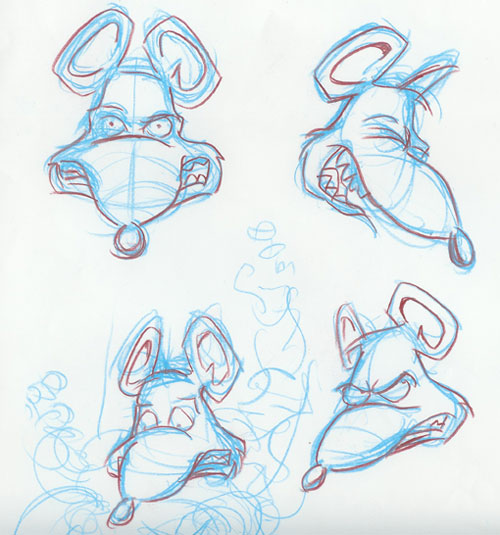 At some point, I started drawing my original design, with a more exacting animation friendly line work, but kept the playfulness. After all, Roscoe was the sum total of all my cartoon experiences as well as comic book inspiration — Mort Drucker, Looney Tunes, Terry Toons, Don Martin, Al Davis, and many others. I wanted an element of shear goofiness. I wanted Roscoe’s eyes to be uneven, his posture unheroic, and his ears to sit on the top of his head like Mickey Mouse. I’d always loved the notion of Big Daddy Roth’s “Mickey Rat” and Roscoe was my Mickey Rat. A gun-toting rodent, the anti-Mickey. 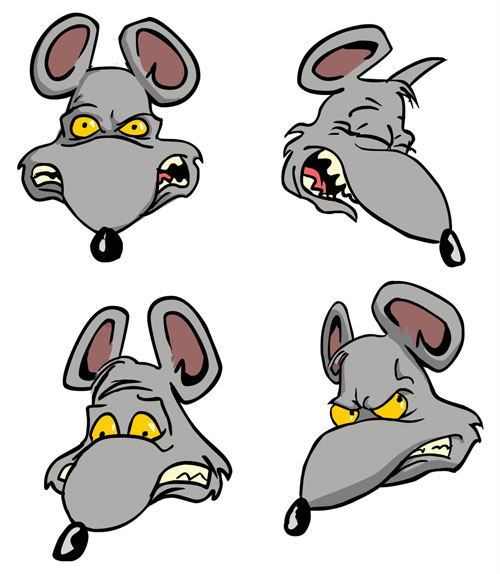