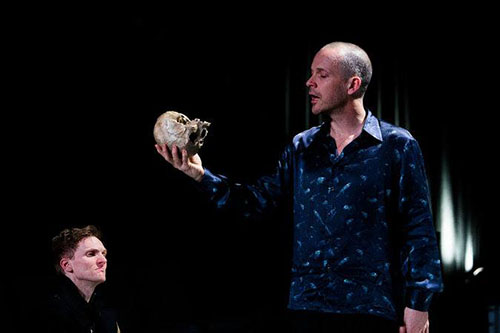 Judie and I went to see Peter Sarsgaard in Hamlet at the intimate Classic Stage Company on 13th Street in NYC. Just as we were about to take our seats we were surprised byÂ Saturday night live TV Funhouse animation directorÂ J.J. Sedelmaier. Suddenly, J.J. and I realized Patti Smith had just taken her seat in the next row and we were like little kids seeing the punk icon. Turns out she was with director Darren Aronofsky. Â Later I noticed a guy in a black suit and white shoes, which I couldn’t help complimenting him on. I told him they were pretty badass shoes, andÂ Joe Jackson would be jealous. I’m pretty sure he was Butch Vig, legendary producer and leader of the band Garbage. Oh, and the play? Well, “the play’s the thing,” and it was brilliant. Scarsgaard, with shaved head looked much like a manic Michael Stipe. I watched him deliver cliched lines like “to be or not to be” in a fashion that made them sound as if I’d never heard them before. I was also pleasantly surprised to see character actor Harris Yulin playing Claudius.