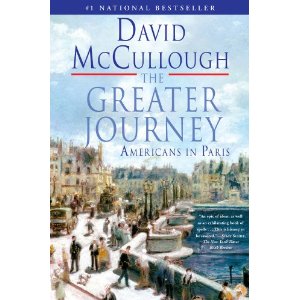 You may have heard David McCullough as the narrator on many of Ken Burns’ documentaries on PBS such as The Civil War, Â The Brooklyn Bridge, and many episodes of the American Experience. McCullough speaks like the voice of history, probably because he’s not just reading a script, but because he’s steeped in the material.

His latest endeavor, weighing in at 752 pages is titled Â The Greater Journey. It’s a collection of accounts of some the 19th Century’s greatest American artists, medical students, writers, thinkers, diplomats and scientist, who all were drawn to Paris for enlightenment. Such names as Mary Cassatt, Oliver WendelL Holmes, John Singer Sargent appear in their their formative years and go on to greatness. But my favorite was the story of the painter Samuel Morse, who invents the telegraph on a steamship voyage home from France.

Other great accounts are the horrors and stupidity of the Franco Prussian War and the surgery school that fed human remains to a cage full of dogs. Those were the good old days!