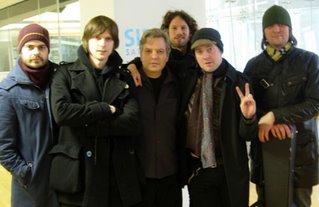 I Went to Sirius Satellite’s studio friday. I was invited to watch the Kaiser Chiefs one of my newer favorite bands from England. The boys did an interview and played live in the main stage area — an impressive glass-enclosed area to promote their upcoming new record “Yours Truly, Angry Mob.” They performed their 2005 UK hit “I Predict A Riot” as well as new songs “Ruby,” Everything Is Average Nowadays” and the cleverly titled “Love Is Not A Competition (But I’m Winning).” It was difficult to not clap after each song, since I was sitting right in there with the band. One of the best bands to come along in years — Brit Rock is alive and well! That’s me in the middle.