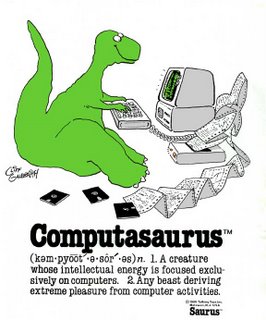 After some digging, we found an old stat of the original Computasaurus. Penned around February 1986, this was the drawing that started it all. A phone call from a friend who was struggling to learn DOS on an IBM personal computer inspired this sketch. It was done with one single drawing, there were no studies or alternate poses. It just appeared.

This site was originally posted on Blogger.com as bloggerasaurus.blogspot.com and up until recently, it was very easy to import a blog from Blogger into a new WordPress blog (which is what I’m using. Unfortunately, I have to import all my posts manually and have no way of preserving the dates of the posts or eveyone’s comments. So for the record, this blog was actually begun in November of 2006, but it will appear to have started February 2007.

Many people have asked me over the years if I would ever revive the “Sauruses” or “Saurus Gang”. Theyâ€™ve cited many reasons to re-launch the once ubiquitous reptile, such as nostalgia. Many 80â€™s icons are very popular now. While one in 10 Americans owned something with a Saurus on it back in the late 80â€™s, I wondered if todayâ€™s public would be interested in something created in 1986. Others suggested that two decades later, there are many new Sauruses to be drawn that didnâ€™t exist years ago.

Lately weâ€™ve been getting quite a few emails at Talking Tops from people asking if we still made Saurus T-shirts or coffee mugs, etc. So I thought it might be fun to draw a few new characters, and dig out a few old ones.

We have quite an archive of Saurus materials at Talking Tops. Beyond the expected original art that I penned 20 years ago, is examples of Macyâ€™s ads, Hallmark products, unpublished comic art, and prototypes of many products that were never made. My favorite proposal was the toilet paper holder for the Philippines.

So Iâ€™ll be posting a few original 1986-89 Saurus drawings, as well as some new sketches. Iâ€™d be interested in any feedback and suggestions; what sort of Saurus would roam the Earth today? Iâ€™ve been thinking about cellphonasaurus a lot lately, but surely thereâ€™s many other activities that didnâ€™t exist in the late 80â€™sâ€¦ including blogging. Computasaurus was the first Saurus I came up with back in February â€™86. Maybe I should begin with Computasaurus in 06.