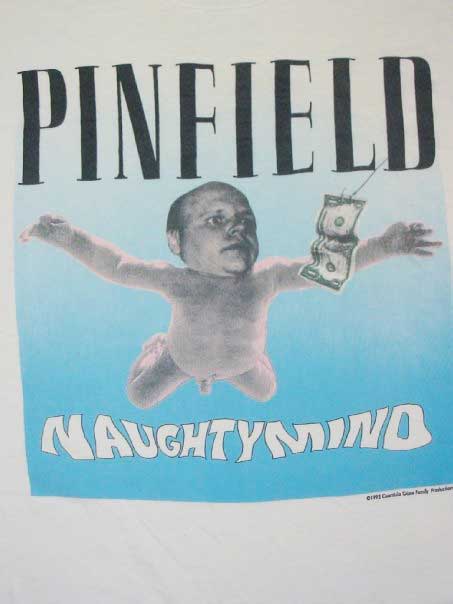 Almost 20 years ago I made the above T-shirt as a humorous response to the rise of two alt-rock juggernauts: Nirvana and Matt Pinfield. While Nirvana was Â all over the radio and MTV, Pinfield’s star was just starting to rise. In New Jersey, Matt was a local hero; serving as programming director and afternoon record jock at the Jersey shore’s 106.3 WHTG and DJing at the Melody Bar in New Brunswick three nights a week. Matt and I had crossed paths several times, but when he was DJing at a wedding reception I attended around 1989, we got into a long discussion about new bands. He asked me if I liked The Wonder Stuff and we’ve been friends ever since. Years later I would take him to his audition in New York for MTV.

When I first heard “Smells Like Teen Spirit” I thought it was a new Pixies tune. I later found out that was exactly what Kurt Cobain was going for. The song seemed like it was everywhere, yet I never grew tired of it. I never really appreciated the rest of the album, but I always felt Teen Spirit was one of the greatest rock songs I’d ever heard. Some months later, I received a frantic call from Pinfield, “…how fast can you get into the city? I’m at NBC studios! Nirvana is doing their soundcheck for Saturday Night Live Â at Rockefeller Center!”

Since I was only 45 minutes out of Manhattan, I raced up the NJ Turnpike, bolted into NBC, found Matt and we were whisked through glass doors past a group kids on a class trip. I’ll never forget how wide their eyes got as the doors opened and Teen Spirit blasted out into the hall. The doors closed behind us and the kids pressed themselves against the glass to here more. We entered the Saturday Night Live studio and there was G.E. Smith, the legendary bandleader and music director of SNL. We sat in the dark with a few people from CMJ magazine. There was Nirvana, bashing out Smells Like Teen Spirit for the five luckiest people in New York City at that moment in time.