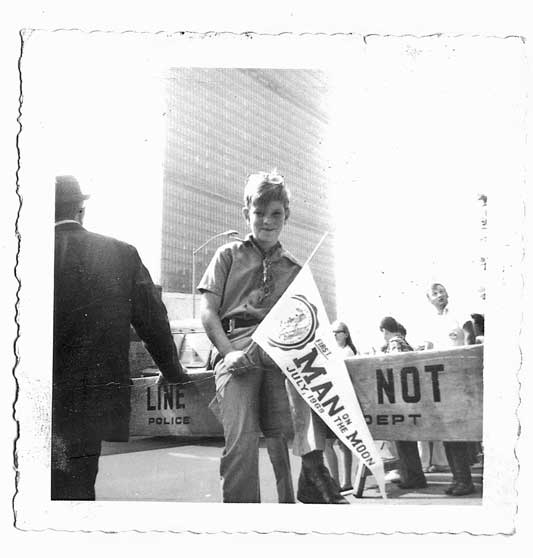 Ten year old Cliff Galbraith in front of the United Nations building in NYC, after parade for Apollo 11 Astronauts in 1969
Â

While he had many interests including cartoons, pro sports, art, rock music and comic books, this guy loved anything to do with space travel. Astronauts, space ships, science fiction or fact. It didn’t matter whether it was Neil Armstong on the moon or Charlton Heston on the Planet of the Apes. He read everything from Issac Asimov to Arthur C. Clarke to H.G. Wells. He was drawn to TV shows like The Outer Limits, Lost in Space, Star Trek, Space Angel, Astro Boy, Fireball XL-5, The Invaders, et al.

But the Apollo astronauts were his greatest passion. He’d cut out their pictures from newspapers and magazines and hang them on his bedroom walls. He’d draw them and their space crafts, and make little comic books of their journeys.

From time to time, I’d wonder what this little guy would say if he could meet the adult version of himself. What would be his reaction to the notion that he would one day be able to create animation or edit written stories on a personal computer? I think he’d ask me why I ever stopped drawing space ships, and when was I going start again?

This picture was taken by my mom, who took me to see my heroes in late summer 1969. She also taught me how to draw, and introduced me to Picasso, Dali, and Ruebens. Thanks Mom.